Ukraine has taken over the entire Kyiv region, including several towns near its capital, according to the country’s deputy defense minister.

Hanna Maliar said on Saturday evening that the country’s armed forces had regained control of the entire provincial area from Russian forces. “Irpin, Bucha, Hostomel and the whole Kyiv region have been liberated from the invader,” she said in a Facebook post, referring to suburban towns north of the capital.

Ukrainian National Police released video filmed in Bucha and Hostomel, which is located near a key airport that Russian forces sought to control. The video showed Ukrainian police teams in armored vehicles patrolling bombed-out neighborhoods, including devastated buildings and cars.

Russia has withdrawn its troops from around kyiv in recent days after failing to break through Ukrainian defences.

Ukrainian officials have said Russia is refocusing its offensive on the Donbas region – where it backed a separatist uprising in two separatist “republics” in 2014 – the second city of Kharkiv and other areas in the east of the country.

In a video address on Saturday evening, President Volodymyr Zelensky accused Russian forces of exploiting territory behind them as they retreated.

“In the north of our country, the invaders are leaving,” he said.

“It’s slow but noticeable. In some places they’re being pushed out by fighting. Elsewhere they’re abandoning the posts themselves. They’re mining all that territory. Houses are mined, equipment is mined, even the bodies of the deceased people.

Russia confirmed this week that it was reducing its military activities near kyiv and the northern city of Chernihiv to focus its efforts on taking control of Donbass.

massed in the separatist enclave of Transnistria in Moldova and mobilized for a possible attack that could open another front in the war.

The General Staff of Ukraine’s Armed Forces said it believed troops based in the self-declared Russian-occupied republic, which borders southwestern Ukraine and is near the third-largest city of Odessa, were preparing to carry out “provocations”. along the border.

But Moldova and the separatist authorities in Transnistria denied this, with Chisinau saying it was “closely monitoring the security situation in the region”.

“At the moment, there is no information confirming the mobilization of troops in the Transdniestrian region,” the Moldovan foreign ministry said.

“All military units in the territory of [Transnistria] are in permanent deployment locations and are carrying out their activities in a standard operational mode,” he said, adding that the troops had “deliberately minimized even planned activities” to avoid an escalation of tensions.

The threat of Russian troops based in Transnistria entering the Ukrainian conflict is of concern to Moldovan authorities, who are also struggling to cope with the largest influx of Ukrainian refugees per capita.

In a regular update on its operations issued early Saturday, Ukraine’s military said it had “noted the redeployment of Russian troops and divisions from the so-called Transdniestrian-Moldavian republic to demonstrate its readiness to attack and possibly military action against Ukraine”. .

Ukraine has taken a tougher rhetorical stance on Russia after inconclusive peace talks in Turkey where Moscow pressured kyiv for territorial concessions and a commitment to neutrality. 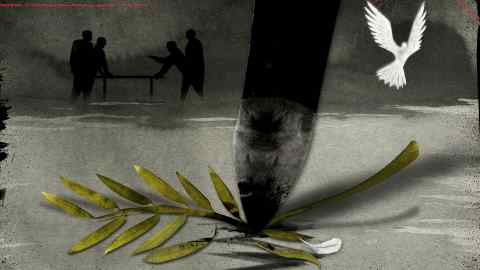 Zelensky said in a Interview with Fox News that Ukraine would not cede any part of its territory to Russia because its people “would not accept any outcome” other than victory.

“We are not trading our territory,” the Ukrainian president said. “The question of territorial integrity and sovereignty is out of discussion.”

Zelensky also raised the prospect of Ukraine joining NATO, which would run counter to Moscow’s central condition for a peace deal.

“It’s hard for us to talk about NATO because NATO doesn’t want to admit us,” Zelensky said. “I think it’s a mistake because if we join NATO, we make NATO much stronger,” he said, adding that Ukraine was “not a weak state”.

The statements contradict what Vladimir Medinsky, the Russian negotiator, said following the talks. Medinsky claimed that Ukraine had accepted Russia’s main demands not to join NATO and to refuse to host military bases.

Zelensky, who has repeatedly criticized NATO for doing too little to help Ukraine, said he invited the United States to be part of a future peace deal during his recent conversation with the President Joe Biden. Washington, he said, is “studying the proposal.”