The statements and interventions of the protagonists of the third edition of the Rai 1 program hosted by Milly Carlucci.

Tuesday February 8 12:00 p.m. from the Auditorium Rai of the Foro Italico in Rome the press conference of de The Masked Singerdirected by Milly Carlucci and directed by Luca Alcini. The live report of the speeches and statements of those present.

Third edition of the program led by Milly Carlucci in which 12 celebrities compete, through singing performances carried out anonymously thanks to picturesque and spectacular masks. Among the novelties, the duets in which the “masks” will perform with big names of the Italian music scene.

The press conference begins with the intervention of Stefano Coletta – Director of Rai 1: “This year there will be six episodes. What struck me first in this program, in addition to the female population, are also the very young targets who are passionate about this program. The second edition confirmed to me that children and teenagers are passionate about this unusual mechanism of Italian generalist television.

At the center is the mask, link between a congenital conflict that exists in every man between being and appearing. Many philosophers have written extensively on this subject. The masks still represent a special element of attraction today. The new edition is even more linked than in the past to the atmosphere of the country. Lightness will reward this program.

Historically, we need to relate to mechanisms that make us forget what we have been through and return to normal. This talent game will bring a lot of joy to homes. Each of the masks will represent an art, a craft, where everyone can project themselves. The diverse and talented company represents the community that audiences want to connect with.

We welcome Sara Di Vaira, Simone Di Pasquale, Arisa and Vito Coppola. Thanks for Endemol. When the public feels and perceives that a group has worked in freedom, it connects more, lives freedom”.

Direct press conference of Il Cantante Mascherato 3: The other statements

Leonardo Pasquinelli – CEO Endemol Shine Italy: “We think this format is able to bring the family together around the TV. Thanks to Milly Carlucci and her modus operandi”.

Milly Carlucci“My gratitude goes to all those who made this program possible. As Stefano Coletta said, who among us has never worn a mask? In our case, the characters who wear the mask do so for freedom and not to hide. At the beginning of this project, I was asked to humanize the masks, to make it easier for older audiences to understand.

This year, the characters will talk to the 4 detectives, obviously with an altered voice. There will be many clues you can still steal from their words. Even gestures can help in trying to get a sense of who the protagonist is.

During the first episode there will be duets. The characters from the first episode: Campagna’s cousins, Masco Masini, Orietta Berti, Cristina D’Avena, Fausto Leali, Riccardo Fogli, Morgan, Mietta, Arisa, Edoardo Vianello and Cristiano Malgioglio. The 4 jurors will be able to unmask the characters.

This year, there are twelve masks. The music will be by Luigi Saccà. Choreography by Simone Di Pasquale. Sara Di Vaira chief inspector who will collect the votes of the public. Vito Coppola will be the soloist. Arisa is a very insightful woman who will certainly make a significant contribution to our investigation.

Arisa: “It was also very difficult to be a competitor of the program (it was in the first edition). It is very pleasant to find the team of Milly, because she is the mother of this family. I have no method of investigation, I will refine it episode after episode.

Catherine Balivo“The notebook is a school heritage. The mask for me has a special meaning, of joy”.

Sara Di Vaira: “It is an honor to be here, during these 15 years I have grown and will grow again in this wonderful family”.

Simone Di Pasquale: “I stage the phantasmagorical ideas of a thousand with a mask”.

Vito Coppola“I immediately perceived the sense of family that reigns here. I will dance alongside masks and characters. Very happy to be here”.

Matteo Addino – choreographer: “There will be a lot of versatility in the choreographic performances. All under the supervision of Milly, who lets us into the imagination”. 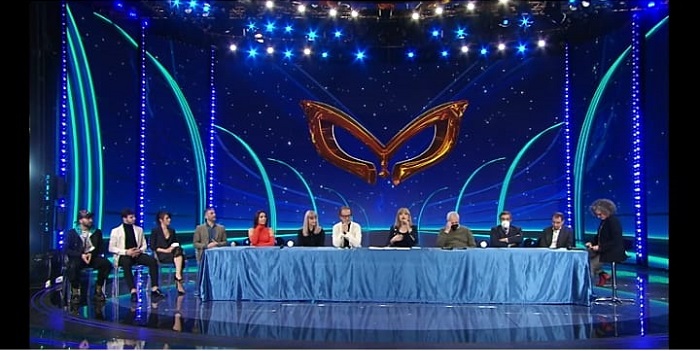 “We are targeting the jury. Regarding the competitor, for us the main argument is that of bringing together the Rai 1 audience. Let’s not think of the neighbour” Milly Carlucci.

What mask and character would you see on Mahmood and Blanco: “Our masks are chosen by the protagonists. The mask must be lived with happiness, ”he replies Milly Carlucci.

On Milly Carlucci as a Festival presenter – Milly Carlucci: “I’ve already done a Festival with Pippo Baudo. I have many commitments to prepare the programs that I already lead. I believe Amadeus was friendly driving it, so having found that ideal balance, why mess with it? ”.

“Amadeus has reached the number that people want to see in Sanremo right now,” he says. Stefano Coletta.

How long does it take to make the masks? Milly Carlucci – ” It is a long process. It starts with a sketch, then the Cosplay professionals translate it into reality. There are so many ways to achieve these kinds of ideas. There is a significant commitment of manual time and everything is made in Italy”.