“A war does not start with weapons. A war starts with propaganda, disinformation and a state-controlled press,” Belgian parliamentarian Katia Segers told DW.

The European Commission has now decided to tackle these issues head-on with the European Media Freedom Act (EMFA), a major legal package aimed at protecting journalists and editorial independence, upholding press freedom and, ultimately, to safeguard democracy in the European Union.

The EMFA, which will be launched on Friday, is a farewell blow from Brussels to member states that have undermined their national media through surveillance, co-option and propaganda.

In her 2021 State of the European Union address, European Commission President Ursula von der Leyen stressed the importance of arresting “those who threaten media freedom” in the EU.

“Media companies cannot be treated as just a business. Their independence is essential. Europe needs a law that guarantees this independence,” she said.

In this sense, media service providers will also have to ensure ownership transparency. As part of the EMFA, they will be required to declare who their shareholders are, a measure aimed at bolstering editorial independence.

According to Reporters Without Borders (RSF), press freedom in the European Union is “caught between two extremes”. A free press is flourishing in some EU countries like Norway, Denmark and Sweden, but faces serious risks in others like Poland, Hungary and Greece.

During a hearing on the Greek spyware scandal at the European Parliament in Brussels last week, Greek journalists Thanasis Koukakis, Stavros Malichoudis and Eliza Triantafillou testified that they had become targets of state-sanctioned surveillance because of their work.

Meanwhile, in Hungary and Poland, independent media have faced crackdowns from government authorities seeking to regulate their ownership and curb media pluralism.

While the Polish state oil company Orlen has taken over some of the country’s media, such as the regional newspaper Polish pressHungary’s national media regulator, the Media Council, has silenced independent radio stations, including Tilos Radio, by refusing to renew its frequency license.

The Commission’s EMFA aims to address these threats, including protecting journalists and their families from the use of spyware and threats from authoritarian regimes.

Many journalists in Greece have fallen victim to government surveillance

It will also ensure that any funding given to public service media is “adequate and stable” and introduce new regulations for state media advertising.

“You have to know what the money is for,” European Commissioner for Values ​​and Transparency Vera Jourova told Czech radio last week. “We don’t want states, as is already the practice in some cases, to publicly fund certain media outlets which then write nice stories about them.”

RSF also asked the European Commission to ensure that no member state “benefits from European solidarity” if it flouts media freedom.

“The EMFA should include respect for media pluralism and independence among the conditionality criteria for the granting of EU funds to Member States, in order to better respond to serious and repeated violations of press freedom in certain of them,” RSF said in a statement.

Countering disinformation is another key element in maintaining media freedom and building media trust in Europe.

The EU should develop a framework that “does not favor propaganda to the detriment of free and independent media”, but rather a framework “that promotes freedom of expression, pluralism and the reliability of information at the national level”, he added. 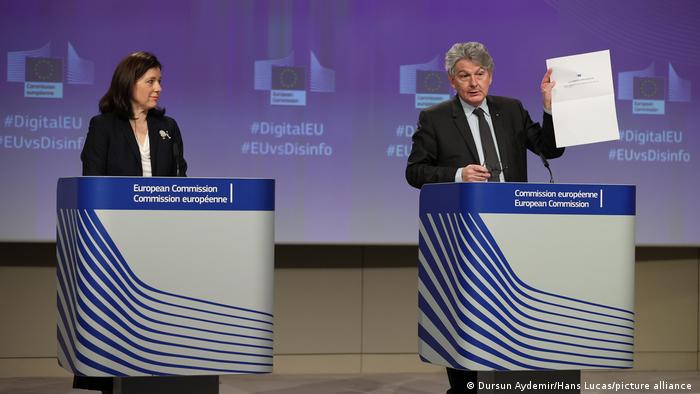 Within the framework of the EMFA, the Commission has proposed the creation of a new European Council of Media Services, composed of national media authorities. Besides monitoring the impact of national regulatory decisions on the overall European media landscape, one of the main tasks of this committee will be to combat disinformation by guaranteeing information on online media platforms, in accordance with the code of EU good practices on disinformation.

While the European Commission’s EMFA has yet to be discussed by EU countries before being formally adopted across the bloc, Damian Tambini, an associate professor in the Department of Media and Communications at the London School of Economics and author of the book “Media Freedom” — said the creation of EMFA could be seen as “both a power grab and a way to protect democratic media freedom.”

“But this may still be the best way forward – if these policies enjoy the trust and support of civil society. democracy,” he wrote in an assessment on media freedom from September last year.

“EMFA will put in place a framework for journalists to do their job ensuring that any form of aggression against them will be punished. The law will also ensure that media regulators work independently and that countries in the EU strengthen public broadcasting.

“Right now, freedom of the press is of the utmost importance to our democracy. So we must protect it.”